UK jobs and inflation eyed as pound rattled by new...

The latest jobless numbers will kick off a busy economic week in the United Kingdom on Tuesday, to be followed by inflation data on Wednesday. Things will heat up in the second half of the week with the Bank of England policy meeting and retail sales figures. But before all that, it will be the latest episode in the long-running Brexit drama that will likely catch the pound’s attention.

Brexit is back with a bang

With the coronavirus pandemic dominating every sphere of financial markets over the last few months, Brexit headlines had all but disappeared from investors’ minds. But as the October deadline nears for when Britain and the European Union realistically need to have a draft agreement ready so that new arrangements can be put in place before the transition period expires on December 31, Brexit is back in the limelight.

The window for reaching a deal is fast closing but this doesn’t appear to have added enough urgency for negotiators, prompting Prime Minister Boris Johnson to take matters into his own hands and add a new dimension to the tortuous talks. In the past couple of weeks, Johnson has not only moved forward the unofficial deadline for reaching an agreement to October 15 and stood firm on the UK’s red lines, he has also risked a collapse in the talks by angering the EU with the decision to override parts of the Withdrawal Agreement that relate to the sensitive issue of Northern Ireland.

Internal Market bill could be illegal

The proposal, which hands back some power from EU single market rules in Northern Ireland to Westminster in the event of a no-deal, is part of the government’s Internal Market Bill. The legislation aims to update the laws governing how businesses can trade internally in all four nations of the UK after Brexit.

The UK Parliament is due to have its first debate on the bill on Monday and vote whether to take the legislation onto the next stage of passage. Johnson’s strong majority of 80 in the House of Commons means the bill is almost certain to get through round one. However, with a growing number of Conservative MPs becoming uneasy about the implications of the bill as it could be in breach of international law if the Withdrawal Agreement is unilaterally amended, the number of Tory dissents will be watched for clues on how big a revolt Johnson is facing.

The pound is likely to get a lift from a sizeable Tory rebellion as this would mean Johnson would have to significantly water down the bill or drop it altogether. If lawmakers were to reject the bill or vote down the parts that are potentially illegal, this would eliminate a sizeable risk from the ongoing Brexit talks by restoring some level of trust between the two sides.

Sterling could recover back above the $1.30 level if the Brexit tone starts to improve as relations between the UK and the EU hit a low point after Johnson’s latest gambit. Further gains above $1.30 and towards the September 1 peak of $1.3482 are possible if the odds of a deal start to rise.

Alternatively, if it looks like the legislation is likely to fly through Parliament, the pound could easily slip below its 200-day moving average, currently at $1.2734, opening the way for the 61.8% Fibonacci retracement of the March down leg at $1.2513.

Low unemployment rate may not hold for long

However, aside from the dangerous Brexit game, UK data and a potentially dovish Bank of England also pose downside risks for sterling.

First up is Tuesday’s labour market report due at 06:00 GMT. After shedding 220k jobs in the three-month period to July, the UK economy is expected to have lost a further 125k posts in August. The jobless rate is projected to tick up from 3.9% to 4.1% in the three months to August. This would compare favourably to other countries such as the United States that have seen the unemployment rate hit double digits. However, with the UK government’ furlough scheme ending in October, many are warning of a tsunami of jobs losses without any fresh support. 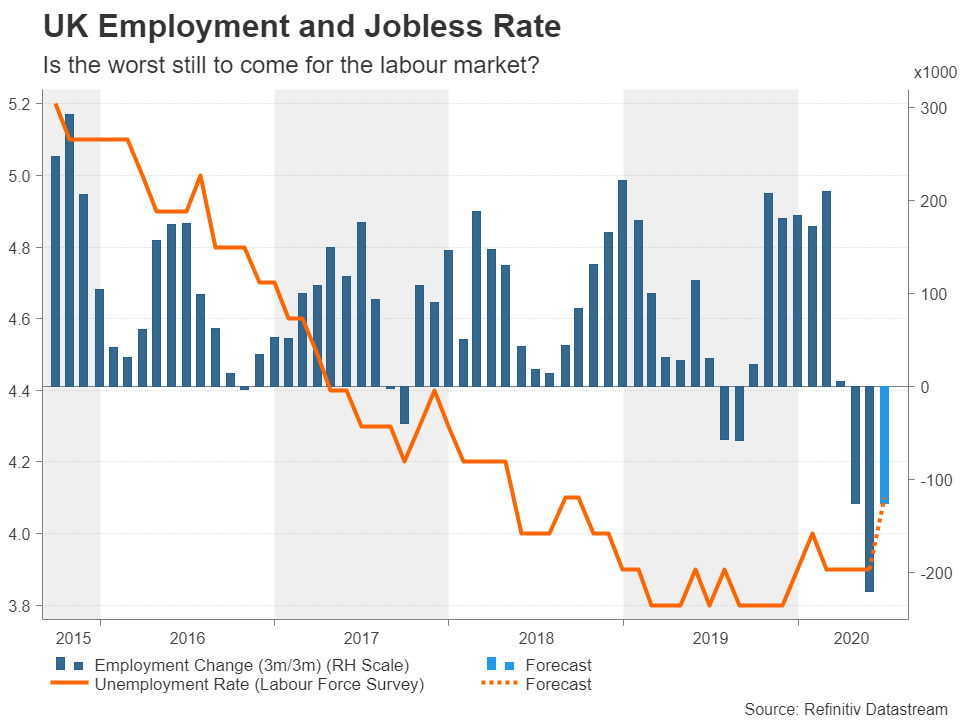 The recent flare-up in virus cases across Britain is also a threat to the jobs recovery as it’s already led to tight limits being imposed on public gatherings, causing a fresh setback for the UK’s large hospitality industry as well as the wider services sector that makes up 75% of the economy.

Attracting somewhat less attention on Wednesday, the latest inflation numbers will be released at 06:00 GMT. With inflation being the least of central banks’ concerns right now, the data is not anticipated to be market moving. 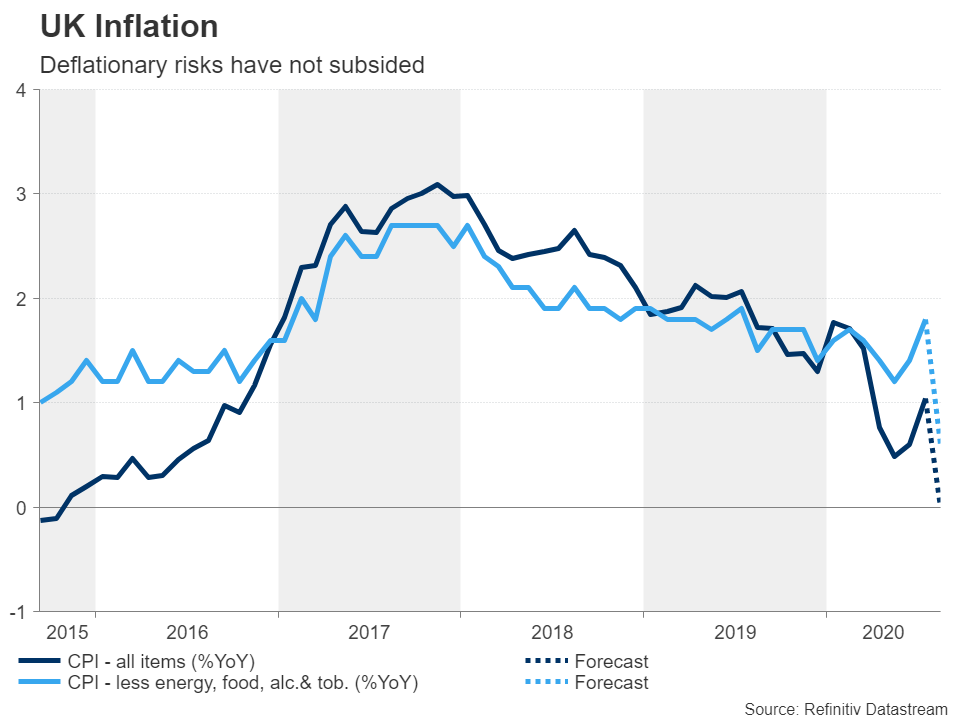 The headline rate of the consumer price index exceeded the forecast in each of the previous two months, raising doubts about the deflationary impact of the pandemic. However, in August, the year-on-year rate is expected to drop to zero, which would make it a four-year low. The core rate that excludes volatile prices like food and energy is also forecast to head lower, falling to 0.6% y/y, giving the Bank of England little reason to fret about inflationary pressures as it mulls additional stimulus.